Posted by Unknown at 20:06 No comments:
Email ThisBlogThis!Share to TwitterShare to FacebookShare to Pinterest

Cyber-attack on Spamhaus slows down the internet

Cyber-attack on Spamhaus slows down the internet
Hundreds of thousands of Britons are unsuspectingly taking part in one of the internet's biggest-ever cyber-attacks, on a spam-fighting organisation based in London — because their broadband router has been subverted.
Experts said the cyber-attack had slowed down the internet for some people on faster connections.
Spamhaus, which operates a filtering service used to weed out 80% of spam emails — offering counterfeit pharmaceuticals, useless credit offers and weight-loss pills — has been under attack since 18 March after adding a Dutch hosting organisation called Cyberbunker to its list of unwelcome internet sites.
A collateral effect of the attack is that internet users accustomed to high-speed connections may have seen those slow down, said James Blessing, a member of the UK Internet Service Providers' Association (ISPA) council. "It varies depending on where you are and what site you're trying to get to," he said. "Those who are used to it being really quick will notice." Some people accessing the online streaming site Netflix reported a slowdown.
Spamhaus offers a checking service for companies and organisations, listing internet addresses it thinks generate spam, or which host content linked to spam, such as the sites selling pills touted in junk email. Use of the service is optional, but thousands of organisations use it millions of times a day in deciding whether to accept incoming email from the internet.
Cyberbunker offers hosting for any sort of content as long, it says, as it is not child pornography or linked to terrorism. But in mid-March Spamhaus added its internet addresses to its blacklist.
In retaliation, the hosting company and a number of eastern European gangs apparently enlisted hackers who have in turn put together huge "botnets" of computers, and also exploited home and business broadband routers, to try to knock out the Spamhaus system.
"Spamhaus has made plenty of enemies over the years. Spammers aren't always the most lovable of individuals, and Spamhaus has been threatened, sued and [attacked] regularly," noted Matthew Prince of Cloudflare, a hosting company that helped the London business survive the attack by diverting the traffic.
Rather than aiming floods of traffic directly at Spamhaus's servers — a familiar tactic that is easily averted — the hackers exploited the internet's domain name system (DNS) servers, which accept a human-readable address for a website (such as guardian.co.uk) and spit back a machine-readable one (77.91.248.30). The hackers "spoofed" requests for lookups to the DNS servers so they seemed to come from Spamhaus; the servers responded with huge floods of responses, all aimed back at Spamhaus.
Some of those requests will have been coming from UK users without their knowledge, said Blessing. "If somebody has a badly configured broadband modem or wireless router, anybody in the outside world can use it to redirect traffic and attack the target — in this case, Spamhaus." Many routers in the UK provided by ISPs have settings enabled which let them be controlled remotely for servicing. That, together with so-called "OpenDNS" systems online which are known to be insecure helped the hackers to create a flood of traffic.
"British modems are certainly being used for this," said Blessing, who said that the London Internet Exchange — which routes traffic in and out of the UK — had been helping to block nuisance traffic aimed at Spamhaus.
The use of the DNS attacks has experts worried. "The No. 1 rule of the Internet is that it has to work," Dan Kaminsky, a security researcher who pointed out the inherent vulnerabilities of the DNS years ago, told Associated Press. "You can't stop a DNS flood by shutting down those [DNS] servers because those machines have to be open and public by default. The only way to deal with this problem is to find the people doing it and arrest them."

On Wednesday, Apple launches its latest product. Of course, they won't say what it is but the large number 5 on the invite spells out pretty clearly that it's the latest iPhone and it'll be called the iPhone 5 (unless there are five separate iPhones going to be released, of course, but the chances of that are nil to zero). So what should we expect? Nothing is certain, but read on for our best-informed guesses - your cheat sheet to Wednesday evening's event.
All-new looks

Since the iPhone 4S was cosmetically near-identical to the iPhone 4, expect a wholly new design this time around. Leaked images suggest a similar glass front but with a proportionally longer display: enough for an extra row of app icons, which may cause app developers some headaches or mean that older apps have black lines at either edge, working as they always used to. The longer screen could make video watching more pleasurable as it'll be closer to the widescreen 16 x 9 ratio.

It will also have a metal back. Since it's hard to get signals (wi-fi, 3G and so on) through metal, expect a section that's more signal-friendly like glass or plastic. The first iPhone had a plastic section on the back for this purpose.

And along with 3G, expect the new iPhone to have 4G, too. Of course, at first there'll only be one 4G frequency in the UK, the 1800MHz band chosen by Everything Everywhere and theoretically switched on tomorrow. There's no confirmation but I'd say that this frequency will be included in the iPhone 5, making it a poster boy for speedy data transfer. At last, no more stuttering browsers or long delays for web pages to load. Yeah, right.

This is the development that's as near-definite as can be. Last year, rumour has it, a bigger-screened iPhone was on the cards but was nixed when the apps just didn't look good enough. So if that problem's solved, expect a 4-inch display, instead of the 3.5-inch one all previous iPhones have had. It'll still be a Retina Display, though the resolution will change to fit the larger display.

That display may well use a different technology that makes it thinner, allowing the iPhone 5 to slim down overall. Not that the current model is plump, but the new one may shave around 1mm off the thickness.

Frederico Ciccarese
New software
The latest OS, version 6, will be on board with gorgeous new maps (courtesy of TomTom) and improved capabilities from Siri, the voice recognition program. Note that some of the Siri features may only be available in the US at first.

The familiar 31-pin connector on the base of the phone is likely to be replaced with a smaller one - though not the microUSB connection on almost every other handset. So your iPod speakers will need to be replaced or to have an adaptor to work.

The iPhone 4S processor is called the A5; the latest iPad has the A5X, which is the A5 with extra graphical processing grunt. Expect the A5X or even a new model called the A6 to feature in the iPhone 5.

The new software includes a neat feature called Passbook which will collect together your boarding passes, tickets and more. It may be connected to the phone's GPS, so your plane ticket could pop up on screen as you approach the airport. And it could feature NFC, the contactless connection used in the London Oyster card system. NFC is already on several mobile phones but Apple could be the first with an end-to-end system to make NFC really work, though again it may only be for the US at first.

That 4G drains battery life faster, so it's likely there'll be a bigger cell in the iPhone 5. And since Apple likes to make other components smaller to allow for more battery, expect the rumours of a nano sim to be true. Apple switched from a regular sim card to a micro sim with the iPhone 4 and now nearly every high-end phone favours the smaller model. A similar rush to the smallest sim may follow from other manufacturers.

Overall, the new iPhone is likely to be a much bigger upgrade than from iPhone 4 to 4S. And though many fanboys will be disappointed, you can expect it to sell in greater numbers even than its super-selling predecessors.

Apple always releases within days of its product announcements. The only exceptions are for the first of a new type of product, when approval from the American FCC is required in advance, which is why the first iPhone and iPad were announced months ahead of release. That doesn't apply here. Apple likes a big opening weekend and favours Fridays for onsale dates, so you can bet that the iPhone 5 will be in stores on Friday 21 September, with pre-orders probably starting on Wednesday. On your marks...
The images on this page are mock-ups of how the iPhone 5 *may* look by designer Frederico Ciccarese
On MSN Tech & Gadgets: Apple iPhone 5: what we know so far

http://tech.uk.msn.com/mobiles/the-new-iphone-what-in-store
Posted by Unknown at 15:01 No comments:
Email ThisBlogThis!Share to TwitterShare to FacebookShare to Pinterest

Posted by Unknown at 13:32 No comments:
Email ThisBlogThis!Share to TwitterShare to FacebookShare to Pinterest

Some recent work for BC Tree Surgery... 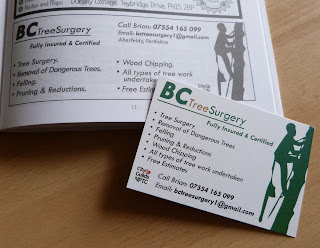 Posted by Unknown at 08:15 2 comments:
Email ThisBlogThis!Share to TwitterShare to FacebookShare to Pinterest

Just because you're paranoid doesn't mean they're not after you. Or, indeed, trying to fry your brains with electronic waves.

If you come out in a cold sweat at the thought of all the invisible waves pinging around your four walls - and don't fancy clambering into a Faraday cage for some protection - then you might be due a spot of redecorating.

Researchers at the Centre Technique du Papier have come up with a wallpaper that blocks wi-fi and mobile phone signals. Slap this stuff all over the walls, floor and ceiling of your bedroom and you'll create a haven that takes you back to a time before phone networks and the mobile internet even existed.

Well, it's one way to stop your partner from making those bedtime Facebook updates.

The wallpaper - dubbed Metapaper by its creators - only blocks wi-fi and mobile phone signals. So your incoming FreeView TV signal, for instance, can still get through your walls.

Although it's likely to be most useful in places where ringing mobiles and other electromagnetic disturbance is a genuine problem (such as theatres, concert halls and hospitals) Metapaper is also set to be made available for private purchase.

As well as blocking signals coming in, it also blocks your own signals from going out - so you could also look at this as adding an extra level of security, since your wi-fi network could potentially be limited to just your own home.

The team behind the wallpaper says it works by using conductive ink that filters out the specific frequencies that carry mobile phone (GSM) or wi-fi signals (0.9, 1.8 and 2.1 GHz for mobile phones, 2.45 and 5.5 GHz for wi-fi).

It's set to go on sale next year at a price that should be no higher than what you would expect to pay for mid-range wallpaper. The technology could also be integrated into plasterboard, wood or floor coverings.

http://tech.uk.msn.com/blog/tech-and-gadgets-blogpost.aspx?post=505e6c3e-8d2a-40d3-88a1-4b521fda21b2
Posted by Unknown at 08:34 No comments:
Email ThisBlogThis!Share to TwitterShare to FacebookShare to Pinterest
Older Posts Home
Subscribe to: Posts (Atom)